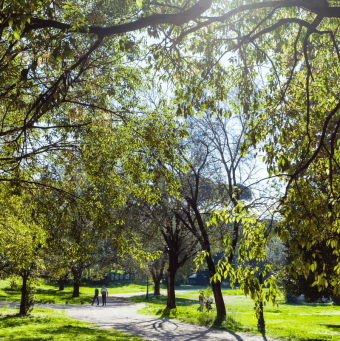 The consensus is that we need more open space.

When the government decides to shut down parks, close walking trails, after having already shut down community centres (arenas, pools etc), In larger urban areas, like Toronto and Hamilton, finding more open space can/is a REAL challenge. To the naked eye, this can be viewed as knocking down buildings and replacing them with parks. Yes, this is one way. Fortunately, there are other solutions available that municipalities are now looking at:

1. VACANT LOTS: Your city may own vacant lands, which may have been vacant for some time. With a bit of clean-up/organizing and some basic landscaping including a picnic table or two, these areas could become public open space.

2. DOWNTOWN STREETS: Think Toronto (Front/Lakeshore/Harbourfront). Think Barrie (Dunlop/Lakeshore). Think closing off part/all of an existing, street and using it as a pedestrian only area. Wouldn't it be fun to walk, run or ride your bike along this area, without thinking about vehicles? Or perhaps watching out only for the occasional delivery truck? Kind of liberating. Barrie City Council approved the closure of a few streets, including their main downtown one (Dunlop St.) which was overly congested much of the time. They turned it into a local loading zone, where commercial deliveries are allowed, but no passenger vehicles.

3. RE-PURPOSE LANDS: Vacant schools. Other vacant properties/buildings that don't require much clean-up could be repurposed as public open space.

Imagine being stuck in your 500ft2 condo, or an apartment that has no balcony for 8+ weeks? The thought isn't too pleasant. Or if you can get out of your building, you find the sidewalk too busy to practice social distancing, and vehicle traffic too busy, period. Tough luck in finding some space to get some fresh air, or personal space, while practicing social distancing. Imagine if the street was closed off, so you could stretch your legs, dance if you desire, interact (at a distance) with your neighbours, or perhaps find a curb and people watch for a while. Wouldn't that be refreshing? It would likely help with your mental health health a bit too!

This is called public open space. Yonge & Dundas Square, Mel Lastman Plaza, Nathan Phillips Square and others are well known public open spaces. There are examples in your own community, some of which you might recognize. Imagine having more to choose from, especially during this pandemic, where space is at least at a premium, if it is actually available.

Public open space is most often recognized as parks, yet parks are only one form of it. Your local skateboard park is a "park" using concrete rather than grass.

Ontario law requires developers to donate 5% of their lands, or pay 5% of the value of their property as Cash-in-Lieu of Parkland. Imagine if your city/town started using some of this cash to build new public open spaces, rather than just parks? It might surprise you  It may be a challenge for your Council or even staff to understand this difference. Traditionally and historically, staff have focused on developing "parks" with equipment to play on. These are the places we've seen recently taped off, with warning signs nearby, which might make you cringe a bit as you walk by. It is sad that many facilities, like this have been closed during this trying time.

If our municipalities saw parkland as open space, which didn't need to be green, this might generate new possibilities. It could also reduce maintenance costs (no lawn moving, trimming). In short, people don't need green to go outside and live. They need open space. They need activities and other things to do outside, including window shopping, maybe sitting on a park bench, or a quiet place to read. Seeing people, but not being close to them, is needed by many. There is a way to be social without, being sociable.

Something to think about...