What is NIMBY Anyhow?? 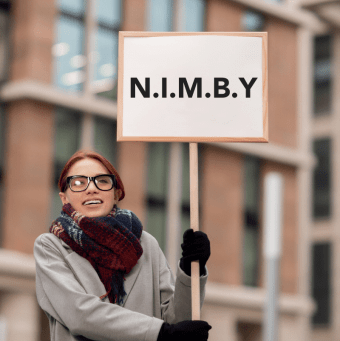 Have you ever heard the acronym NIMBY? If you've ever gone to a public meeting on a proposed development, it is likely you've heard it or,

Not In My Back Yard = NIMBY

NIMBY became synonymous with opposing land development during the 1990's, a call to action in the 2000's and a over used expression since 2010'ish used by people that don't want change. Why has it been so over used? And why do so many people say they don't represent NIMBY, but still fight development? It all seems very vague and well, worn out.

So what does it mean? In today's world, when we don't know something or have a question, we Google it of course. Below are the Google and Wikipedia definitions of NIMBY.

noun: Nimby; plural noun: Nimbys; plural noun: Nimbiess
a person who objects to the siting of something perceived as unpleasant or potentially dangerous in their own neighborhood, such as a landfill or hazardous waste facility, especially while raising no such objections to similar developments elsewhere.

I have highlighted the rationale for NIMBY: something "perceived" as unpleasant or potentially dangerous. Perception is a very broad and subjective term. By that I mean you and I may think that the local convenience store is in the wrong location. Why and where should it be? Well, somewhere else where it doesn't "impact" you or me. Is this the correct use of NIMBY? Not in my professional opinion :-)

NIMBY has become the calling card for those objecting to something they don't like, or want, for no other reason than they don't like it. A group home is planned to locate across the street from your home. You object because you believe it's dangerous to have their residents interact with your kids. Is that really dangerous?

As a professional planner, I often hear people who object to a development at a public meeting saying: "I'm not NIMBY, but I don't like this development". It seems obvious they don't understand the term, as they have no real reason for objecting. And they certainly don't want to be labelled as NIMBY, such a derogative term...

NIMBY has been defined now. Better understood, perhaps. Used correctly in objection to an idea/development, not really.

If we are in fact NIMBY, what are we looking for in our community: something peaceful, with lots of greenery?

Taking this approach means that communities will only grow by adding new housing, and roads. This isn't really practical or helpful. Houses bring places for people to live, only. They don't bring jobs. They don't bring commerce.

NIMBY has become a scapegoat term for objecting to change. It really has warn out its welcome. Time for us to come up with a new expression. Any ideas?

With 2018, we have a wonderful opportunity to leave NIMBY behind, and replace it with a positive, thoughtful acronym...

Wishing my clients, colleagues, family and friends a happy, healthy and wealthy 2018!